Alfred E Neuman would be proud!

The Sydney auction market yesterday handled the threat by the ALP to end civilisation and bring plague and pestilence to the land – by promising modest reforms to the rules regarding negative gearing and CGT discounts if they win office – with aplomb.

The dystopian images, painted by our Prime Minister of Fear, of Sydney BBQ’s of the future barren and devoid of happy banter regarding the importance of working equity hard, fast flipping, value adding cherry bomb splashbacks, painting the lounge soft grey and pink for the overseas market, do not appear to have cut through.

But then the Emerald City would not be nearly so grand if we let Canberra rattle our “can do” attitude and healthy appetite for contracts of debt bondage.   If “Winter is coming” in the form of an ALP-Green property speculation buzz kill, Sydney is not convinced and intends to party hard.

If some pointy heads want to stop the “Property Party People” they have to try harder than modest “softly softly” reforms to negative gearing and CGT discounts.    Some full blooded reforms to the financing of the costs of bringing new land to market (such as these) is what the doctor orders.

The Sydney Morning Herald and Australian Property Monitors report records that agents reported 80% of the 559 listed auctions – versus 636 and 792 in 2015 and 2014 – which is a fair effort.

“Pre-Auction panic” remained elevated at 29% (down 1% on last week)  but   “Hammer Time” bounced back this week to 33% with 187 of 559 listed auctions selling under the hammer or shortly afterwards.

There are two tables this week.  The first contains yesterday’s APM fitter and fatter report sliced and diced.  The second contains a summary of the last few weeks. 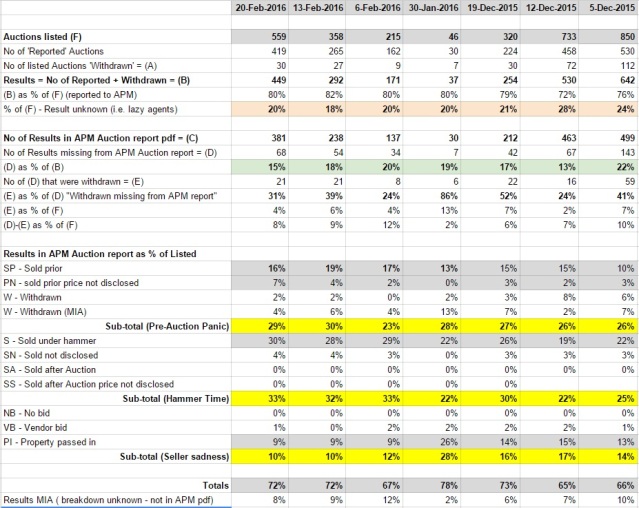