Another exciting day in Sydney with another thrilling auction report from the Sydney Morning Herald and Australian Property Monitors to digest.

This week the TGP introduces a few new “characterisations” of the results and makes a few improvements.

Unfortunately we have been unable to obtain a free copy of the “final” APM results for last weekend so if you had been hoping for a resolution of that cliff hanger – no luck in that department.

The “snapshot” that appears at the top of the report states that of the 733 auctions listed yesterday, results were obtained for 530 (458 + 72).

Spooky! – 530 out of 733 is about 72%. Almost the same percentage as last week.   The slackness of agents in reporting results is at least consistent.

Unfortunately the “results” included in the report only totaled 463, so 67 of the 530 were “MIA” – or possibly did not advertise in Domain or had already pulled the ad and thus there was no pretty advertisement to link to in the results report.

The Table below is new and improved and slices and dices the “results” contained in the report in more ways than a Sushi Bar. 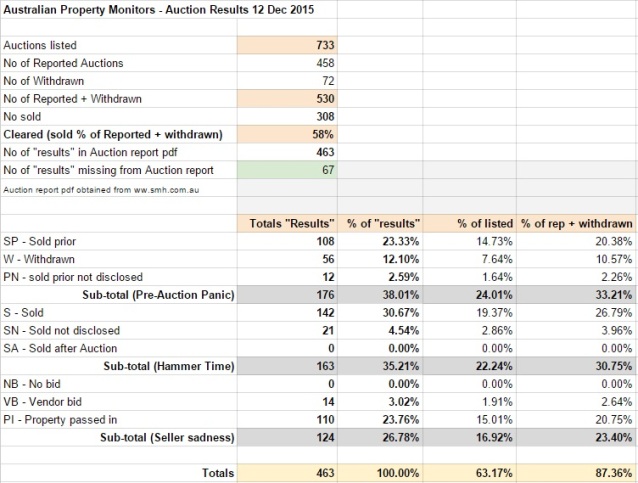 Highlights of the results reported by APM on Saturday.

The table below is the data from last week given the new treatment.

Highlights of the results reported by APM last week.