Assistant Governor Luci Ellis was back on the podium this week providing some guidance on the ways in which ‘growth’ is supported in the short run and long run in the land down under.  Unfortunately, Luci missed the opportunity to explain one of the great mysteries of recent years.   How does blowing a bubble in the prices of Australian housing generate the kind of ‘growth’ that is in the interests of all Australians?

The best part of many speeches are often the concluding words, as they are where the speaker provides the key ‘takeaway’ that the audience may have found a bit hard to follow amidst distractions; the serving of food, excessive complimentary drinks, lack of sleep or some amusing social media meme camouflaged as an urgent message from the office.

The final paragraph of the speech by Luci Ellis last week is no exception and was a cracker.

All of this comes back to the question of where growth comes from, and the answer is it comes from all of us. Growth is not something that is bestowed upon a nation by external forces. And though domestic institutions matter, neither is growth in the long run something that governments can bestow upon society. Instead it’s about the myriad of individual decisions within firms and other organisations to find better ways of doing things. An important question is how we as a society support and enable those decisions. But more important is whether we actually make them.

Who can argue with that?

How can we support the myriad individual decisions within firms and other organisations to find better ways of doing things?

And if that ambition is not sufficient, there was a small scorpion sting from Luci in the form of the warning that support is not enough if we don’t actually make those decisions.

Though no doubt sleepy with conference carbs, even the slowest members of the audience would have connected these sentiments with the earlier sections of the speech where Luci talked about the importance of ‘productivity’ to raising living standards.

If living standards are to rise, it needs to be possible to produce more with the same resources. The good news is that this means better jobs at better firms. But getting there requires making changes and taking risks. It also requires firms to become better, more productive firms, so they can offer those better, higher-paying jobs. And it requires workers to have the confidence to take those jobs, rather than always stick with what they have.

And learning how to spot these productivity out-performers is clearly something that the RBA takes seriously.

It’s worth considering what a productive firm looks like, because not all firms are the same. Some of the latest research on growth highlights the role of differences between firms in creating prosperity (Andrews, Criscuolo and Gal 2015). The evidence both in Australia and abroad is that productivity varies widely across firms, even within the same narrowly-defined industry. Firms that are highly productive – so-called ‘superstar firms’ – tend to grow faster, grow employment faster, and pay better than firms that are a long way from the frontier of productivity (Autor et al 2017). So the data do show that better firms do offer better jobs.

Now a few cynical folk might wonder how such lofty goals fit with the efforts of the RBA (and APRA) over the last 20 years (the last 7 in particular) to encourage the private banks in Australia to blow the ‘mother of all bubbles’ in household debt and the prices of existing residential housing in Australia. 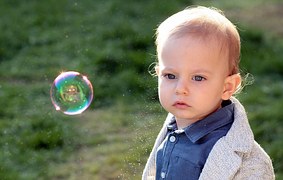 How is pumping up the prices of existing housing, with household debt,  consistent with “supporting myriad individual decisions…to find better ways of doing things“?

How is pumping up the prices of existing housing encouraging productivity superstar firms?

Is that really the best we could do with the enormous power of private bank credit creation over the last 20 years?

Was there really nothing more productive we could have been doing with our capital, natural and human?

Should we blame the RBA?

That is a good question.

After all, there is nothing in the charter of the RBA that says that the RBA has any business in “supporting myriad individual decisions…to find better ways of doing things”

And in the section of the speech entitled “Short Run” there is no reference to anything specific beyond numerous references to “supporting growth” and “supporting demand”.

The basic message for policy is still to support demand when it would otherwise be insufficient to absorb spare capacity.

Since the peak of the mining boom, though, it has been appropriate to cushion the drag on growth as the terms of trade and mining investment declined. That is one of the reasons why monetary policy has been set to support growth in recent years.

Those references to growth could mean anything… demolishing perfectly good football stadiums and rebuilding them scores GDP points and counts as growth but does it really achieve anything?

Does over investment in the form of speculation in the prices of the existing housing stock achieve anything?   Especially when it involves hundreds and billions of dollars of debt?  It is not as though this results in any additional houses.  Just more expensive old houses.

Unintended consequences – Oops sorry / not sorry about that.

But in that quaint way the RBA likes to deploy euphemisms, just as the USS Enterprise deploys deflector arrays, there is a hint of the problem at the end of the ‘Short Run” section.

It can take a while for spare capacity to be absorbed. Therefore policy settings might need to be expansionary for a number of years. So it is natural to want to ask whether extended periods of expansionary monetary policy might lead to unintended consequences.

Unintended consequences?  What on earth could Luci be referring to?  A giant bubble in residential housing prices perhaps?

Even more interesting is the question of what were the “intended consequences”!

Did the RBA hope that “expansionary policy settings” would actually support “myriad individual decisions…to find better ways of doing things” and not a massive bubble in housing asset prices? If so why not say so Luci?

At what point did the RBA start to notice a few nasty ‘unintended consequences’ messing with their ‘intended’ and thoroughly modelled vision splendid.  Certainly not in February 2017 when Luci was busily denying the existence of a housing asset price bubble to the Australasian Housing Researchers Conference where the topic was “Housing and Inequality”

Being the RBA means not having to say sorry

Fortunately, the RBA have found a silver lining to the ‘unintended / intended’ (take your pick) consequences of their 7 year ‘expansionary policy settings’ program.

The findings of that research is that the first-order effect of expansionary monetary policy is to put more people in jobs who wouldn’t have had one otherwise. This tends to benefit households at the lower end of the income distribution more than those whose incomes are already high. For wealth, there are a number of effects that offset one another, so the net effect on summary measures of the wealth distribution tend to be small. While lower interest rates and asset purchases do tend to support asset prices, and higher equity prices tend to benefit higher-wealth households, higher housing prices tend to have the largest effect on households in the middle of the wealth distribution. The effect of asset price increases are also greatest for people with a bit of leverage against their asset holdings; they tend not to be those with the highest wealth.

You see accordingly to the ‘research’ blowing a massive housing asset price bubble is not a problem because it:

What better way to end this post than with those marvellous words of Luci Ellis.

All of this comes back to the question of where growth comes from, and the answer is it comes from all of us. Growth is not something that is bestowed upon a nation by external forces. And though domestic institutions matter, neither is growth in the long run something that governments can bestow upon society. Instead it’s about the myriad of individual decisions within firms and other organisations to find better ways of doing things. An important question is how we as a society support and enable those decisions. But more important is whether we actually make them.

Perhaps the RBA Board might take note of them when considering the intended and the unintended consequences of their expansionary policy settings.