There is still some hope for the ALP even though PM Turnbull is treading very carefully and producing sky high approval ratings.

The hope comes from the increasingly vigorous re-emergence of policy zombies from the Abbott government.  First there was the former PM spraying op-eds in every direction this week explaining how the AEF “Abbott Expeditionary Force” to Syria was the required bold measure that PM Turnbull could not stomach.

Now we have the Minster for National Asset Garage Sales, Mr Andrew Robb, firing spit balls at the Treasurer, Mr Morrison for displaying some wisps of common sense when it comes to flogging asset 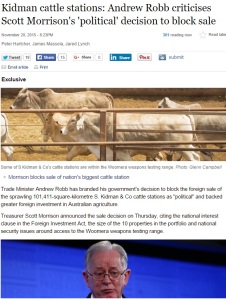 s off shore to our eager currency manipulating trade rivals desperate to “export capital” to Australia.

The SMH does an excellent job of recording Mr Robb’s dissembling (click to read) on the topic.

So what are Mr Robb’s contributions to the debate?

With Mr Robb back on the scene trying to explain why Australians should applaud his efforts to accelerate the efforts of our trade rivals to acquire our asset base in their attempts to manipulate exchange rates via unproductive capital exports to Australia, it should be happy days for the ALP and Senator Wong.   She can back off the wrong headed campaign she launched last week and instead leave Mr Robb and his broken neo-liberal capital flow obsessions to swing in the breeze as the wind changes direction.

But unfortunately, the ALP cannot get too excited about taking advantage of the return of Mr Robb and his policy zombies as the Labor agriculture spokesman Joel Fitzgibbon is still pressing on regardless and floundering around playing the xenophobe/race card (i.e. he thinks it is discriminatory not to allow all our trade rivals exactly the same ability to “acquire” our agricultural assets and manipulate the exchange rate) and repeating the same daft idea that Australia is somehow short of the capital required to develop our agriculture industries.

“The [2012] Greener Pastures report tells us that to meet our aspirations we will need $600 billion in investment in agriculture by 2050, and as an island nation with a small population, by definition much of that will need to come from foreign sources.”

Wake up Joel, wake up Penny, wake up the ALP or you may as well set your alarm clocks and hope the Australian public gets bored of Mr Turnbull / Mr Morrison in a decade or so.