In last week’s slice and dice, the Glass Pyramid enjoyed poking fun at the Negative Gearing / CGT reform “Fear-apalooza”  Festival that is travelling Australia at the moment.

While the festival is attracting plenty of media types – who are munching on the free Jatz and processed cheese slices served up by the LLA (Liberal Ladies Auxiliary) and are knocking back the Claytons “Special Edition” from Mr Morrison’s private stash – and most people are slightly horrified as Mr Turnbull tries to impress by licking the armpits of fruit bats live on stage – the crowds are not really interested in the “spooky” performance.

At least not in Sydney where years of the Daily Terror have made the population unimpressed by Mitt Romney-style scare mongering and the market is still showing plenty of vigor.

As the LNP  “meme/slogan repeaters” have formed a bizarro “Property – The End is Nigh” coalition with doomsters, crashniks, negative vibe merchants and a large portion of The Australian’s Op-ed writers it is necessary to tease out the signs of strength in this week’s auction report.

Auction volumes are NOT low – if you look at the auction numbers for the last few years 593 listed auctions is not a shockingly low number.  Have a  look at the number for this weekend in 2013 if you want to know what a low number looks like.

Median prices are NOT falling – A $200K increase on this weekend last year and $300K on this weekend in 2014 and almost $500K on 2013 demonstrates that there is a lot of debt being sprayed around.

Clearance rates are pretty FIRM – Even if you hate the APM % of reported auctions figure (76%) and prefer a % of listed of auctions (47%) and the patent pending “Pre-Auction Panic” (22%) and “Hammer Time” (30%) characterisations of the Glass Pyramid – this week’s numbers are not a cause for concern and may more reflect a burst of laziness on the part of agents who dropped the ball and failed to report almost 30% of the listed auctions by late Saturday.

It is not just the end of Chinese New Year – If the figures purely reflected a bunch of off shore students getting mum and dad to buy them a palace to study in for Uni – after Chinese New Year – those kids are slouchers as Uni started two weeks ago. No tiger mum would stand for that!

There is no way to get around the fact the market in Sydney is looking pretty solid and is ignoring the claims of the LNP hysterics that the ALP proposals to restrict the ability to claim losses on some investments against wage and salary income and to reduce the current 50% discount to 25% – on the amount of capital gains that are assessable – will destroy the property market.

And why would they be worried?

Our monetary system since the mid 1990s has been based on driving households deeper and deeper into debt.  Since the GFC and especially since the LNP got back into misgovernment in 2013 it has been more of the same on bigger steroids.

As long as the RBA and APRA are prepared to keep cutting the price of debt to ZIRP and beyond and facilitating the flow of cheap debt and households are willing to keep signing themselves up to 30 year contracts of debt servitude – land and house prices will continue to rise.

When was the last time you heard either the RBA or APRA say that they were going to increase the price of mortgage debt to discourage overinvestment in residential real estate?

When was the last time you heard a member of the LNP, ALP or GREENS come out and say that over investment in residential real estate by using debt to bid up the price of existing housing was a bonkers economic policy and that the simplest way to slow it was to increase the price of the debt that is fuelling it?

Driving interest rates lower and inducing households to take on ever larger amounts of debt is a Tri-Partisan projects and NO ONE is talking about it.  Not even when we are clocking a massive foreign debt and gutting our industrial base with an inflated exchange rate to do so.

Notice how the graph (from the excellent Macrobusiness ) stopped climbing after the GFC then took off again after 2013. Take a bow APRA . (Hmmm was there a change of government in 2013?) 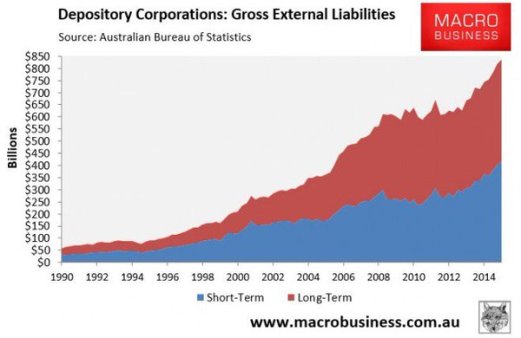 So why on earth would any rational property investor be worried about proposals that AT BEST might knock a bit of foam off the joys of property investment but will have NO impact on the determination of the RBA and APRA and all the levels of government to drive house prices higher on an ever expanding mountain of household debt.

While the cheap debt keeps pumping the house prices will keep rising.

In Ireland, Spain and the US the cheap debt stopped pumping and the housing markets crashed.  Since the GFC that is the one thing the Central Banks (including RBA and APRA) have made clear – the cheap debt will never cease to flow.

If you want to know who really is driving the current household bubble – check out this graph and imagine a “guy called Glen” who is preparing to ride off into the sunset of his retirement on a fat public pension.

The combination of RBA “bait rates”, APRA opening the gates wide to off shore ZIRP/NIRP hot money  and the failure to ensure low cost new land is available for housing development, has been like a rocket under house prices and there are few signs that is going to change. 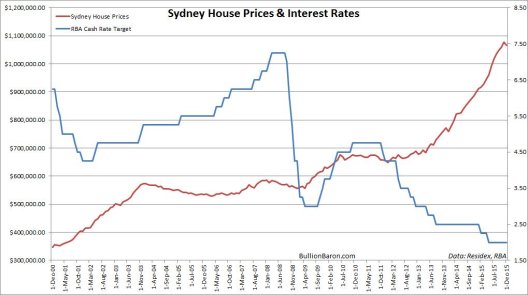 Anyway that is enough ranty for the week.

The Sydney Morning Herald and Australian Property Monitors report records that agents reported just 72% of the 593 listed auctions for this weekend which is a shabby effort.

There are two tables this week.  The first contains yesterday’s APM fitter and fatter report sliced and diced.  The second contains a summary of the last few weeks.

A lot of this softening is probably due to the fact that 28% of auctions listed were not reported by agents.

And one for those who hate missing columns – this is the chart for 27 Feb 2016 – when Glass Pyramid had insufficient petty cash for the Sunday penalty rates.