What do people mean when they say “Sydney is full”

The media in Sydney is currently full to the brim with stories about the fullness of Sydney.

Others argue it started to overflow the lip of the teacup a couple of years ago after the rate of immigration into Australia – which means mostly Sydney and Melbourne – was given a massive boost by John Howard and Peter Costello in the early 2000’s with the tap left on full by successive governments.

Mr Howard explained the connection between being rough on boat arrivals to his desire to run a Big Australia immigration program as follows.

“Every country does have the right to decide the composition, the manner, and the timing of the flow of people. And that’s something the Australian people support…

One of the reasons why it is so important to maintain that policy is that the more people think our borders are being controlled, the more supportive they are in the long-term of higher levels of immigration.

Australia needs a high level of immigration. I’m a high immigration man. I practiced that in Government. And one of the ways that you maintain public support for that is to communicate to the Australian people a capacity to control our borders and decide who and what people and when they come to this country”

Then there are there the “Sydney is not full” motley crew, lead by business leaders like Gerry Harvey and a very strange alliance of Open Border enthusiasts like business friendly Liberal Party Federal Minister Peter Dutton, 3rd way Mr Bill Shorten & friends and Global Welfare Function loving Greens like NSW MP Ms Jenny Leong, who insist that Sydney is nowhere near full and certainly not Australia. 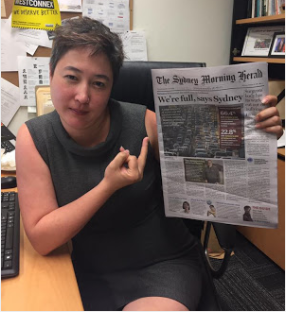 Sydney is not full:  More please!

They often insist or imply that if you do not agree with them you must be a nutty xenophobe or a racist or have a taste for Pauline’s brand of fish and chips.

So what does ‘Sydney is full’ mean?

One thing it cannot mean is that Sydney is literally full of people as we have all seen how high skyscapers can go and how small apartments in Hong Kong can be.

It also cannot mean a permanent state of affairs as attitudes can change as regards to what constitutes fullness.    One day we might all be perfectly happy to live in tiny atomised studio apartments in massive edifices designed by future Howard Roarks.   When that day comes the Sydney basin might be filled with tall spikes of residential housing from shiny sea to the sandstone bluffs of the great dividing range.

What “Sydney is full”  must mean in any meaningful sense is that the living standards and amenity of Sydney for its existing citizens will fall or are likely to fall as additional residents arrive or are born.

Falling living standards does not necessarily mean in an objective sense either, though in most cases the fall will be measurable in a large variety of ways.  It is sufficient that the residents of Sydney are of the opinion the living standard and amenity of their suburb and city is falling.   As they are voters that is all that really matters.

Even just a vibe that Sydney is full is sufficient.

And before all the opinion manipulators out there get too excited and start planning their next social medial campaign to brainwash people to a “Sydney is not full” vibe they should remember that the vibe is the result of hundreds of daily and weekly interactions as people go around their daily lives and businesses.

Two-thirds of Sydney think Sydney is full right now because that is their lived experience.

The “Sydney is not full” delusional thinking and cognitive dissonance.

One of the most common delusions of the “Sydney is not full” tribe is that we can easily accommodate all the new residents to Sydney without any fall in living standards or amenity if only we are ‘smarter’ or plan better or get ahead of the infrastructure requirements.

They have an endless list of magically buzzwords to express this promised land where millions of extra residents are shoehorned in without anyone feeling they are living in #SardineSydney.

At the moment we have 350+ residential construction cranes in Sydney working flat out and yet prices of new and existing housing are sky high and residential vacancy rates in Sydney remain stuck at approximately 2%.    Across Australia there are almost 700 construction cranes.   That is remarkable considering that New York City has less than 30 and the city with the most in the USA – Seattle – has only 58.

Despite record levels of construction and the built environment of Sydney changing rapidly before our eyes it is still not enough.

The “Sydney is not full” tribe simply fail to appreciate that what we are seeing is not the usual post war immigration success story and all we need are just a few more 21st century terrace neighbourhoods near Penrith…… that garbage trucks can access.

We are living and breathing a radical experiment of mammoth proportions and it is no surprise that there is a rapidly growing and potential toxic reaction building.

Sydney is not full but my postcode is very full

One of the oddest bits of cognitive dissonance is the tendency of very well meaning people to insist that Sydney is not full but their post code is definitely packed to the rafters.

They generally have perfectly reasonable arguments as to why their suburb is already full.

Some of the common ones include:

All of these arguments are perfectly fine as local people should have the right to have a large say in the living standards and amenity of where they live.

What they don’t get to do is remain paid up members of the “Sydney is not full” tribe.

If they wish to stay in that tribe they should lead by example and campaign for the relaxation of land zoning in their postcode so that lots of medium rise or high rise apartments can be built and plenty more people can share their wonderful living standards and amenity.

Why shouldn’t the inner west, south, north and east of Sydney all look like high rise Potts Point if that is such a fantastic, vibrant “lifestyle” suburb for the modern rootless cosmopolitan?

Balmain – A good example of the issue

Balmain is a lovely part of Sydney and packed to the rafters with “heritage” but it is literally a very short boat ride from the CBD and for the reasonably fit it is within walking distance.  It ticks every urban consolidation box.  Particularly as the population now is less than 50% of what it was in the 1920s.

All those terraces packed with large families are now being used by ageing couples and singles.

But is anyone in Balmain proposing that the planning be relaxed so that the suburb can experience what happened to Potts Point in the early years of the 20th century when most of Potts Point’s heritage was bulldozed and replaced with high rise apartments?

Nope  – not even the developers who live in Balmain and love the quaint ‘village’ atmosphere.

And good luck to them but they don’t get to preach that Sydney is not full when they think their suburb, right next to the CBD of Sydney, is full and sorry you should try further west.

So what should the “Sydney is not full” crowd be arguing?

As noted above the “Sydney is not full”  bed has a very diverse bunch of bed mates.

There is Gerry Harvey and Penny Leong discussing 19th century English literature and there is Bill Shorten cuddling up to Peter “Ponzi Population” Dutton.

There are bunches of open border globalists and global welfare function enthusiasts stealing the doona and heaps of  mortgage peddlers, bankers, land bankers, developers and assorted other members of the finance, real estate and insurance industries all kicking each other for a bit of the electric blanket.

Snug as bugs in a rug.

If they really want to convince the general public that Australia is not full and that Sydney in particular is not full they need to start explaining:

And most important of all explain WHO IS GOING TO PAY FOR IT and when and how.

Sydneysiders are quickly cottoning on to the fact that nothing comes for free, especially huge chunks of concrete infrastructure.

They are asking the obvious questions.

“Why do I have to now pay $50 per week to drive on a road that was paid off (the M4) and is only being widened and extended because some bright sparks in the “Sydney is not full” coalition reckon Sydney needs to be pumped full of immigration at a massive rate of knots.”

“Why did we sell off our major public assets to private companies that now gouge the hell out of us every quarter, just so the government has money to build infrastructure that does little more than slow the rate that our living standards and amenity fall under the weight of record levels of immigration”

They understand that accelerating the rate of immigration has a high price and they are being expected to pay it each and every day in a multitude of ways.

And they want to know why.

What is the immediate action required?

The immediate action required is obvious.

We must slow the rate of immigration significantly.

Not stop it altogether.

Not ban immigrants from particular regions, races and faiths.

Just reduce the rate while we have a debate about a higher rate, why it is a good thing and how we plan to do it in a way that works and the cost is shared fairly.

Rather than 200,000+ per year it should be reduced, effective immediately, to a rate of approximately 70,000 per year – the historic long term average – at the very least until the infrastructure to support a higher rate has been built.

So that there is no mistake that this has anything to do with our obligations with regard to refugees, the intake of refugees should double to 30,000 per year – assuming we have the support services available to ensure that their settlement and integration into the Australian community is successful.

Once the rate has slowed the “Sydney is not Full” tribe can make their case for a higher rate.

The Glass Pyramid suspects that at the end of their eloquent speeches and golden promises we will find that a reasonable and sustainable rate of population growth may involve little more than:

And most important of all, reform our banking and monetary system that is driving the insane concentration of our population towards the cores of 2 or 3 major cities instead of supporting the development and expansion of our regions and their larger towns.

What is at risk

The remarkable success of immigration to Australia during the post war period was because people understood it was a serious undertaking and took it seriously. And even then it was not smooth sailing.  Very few countries in the world even bother to try to do what immigrant countries like Australia have done.  Bring people from many many countries and cultures together to live, work and play peacefully.

The “Sydney is not full” tribe, both the big business and extreme left wing members, are complacent and just assume that vastly increasing the rate of immigration over an extended period requires little more than simply shouting down anyone who does not agree with them.

But then the consequences of this recklessness are unlikely to be felt in their carefully curated and preserved ‘heritage’ postcodes and comfortable upper middle class enclaves.

For more excellent reading on this issue see below