It is time to call a plumber!   One that specialises in unclogging the credit pipes that until recently were drenching Sydney property markets with fresh sprays of ‘wealth creating’ private bank credit.   This week in ‘Auction Action’ it is a continuing tale of brown patches, of lush greenery gone crunchy, all across Sydney.   With summer approaching (and a Federal election on the horizon) greenkeepers (aka real estate agents, finance brokers and speculators) are doing rain dances and calling up all their “mates” in the water supply networks begging for a few drops of that most precious of substances in a parched country…. cheap ever flowing credit.

As usual there is a lot of talk across the fencing wire about why the spring credit rains have not yet arrived.     Global credit climate change is blamed by many, while others prefer to rely on the bizarre idea that Australia is not different and everything reverts to mean….eventually.

But the truth is much simpler.    The great economic lever pullers of the Australian economy have taken a large greasy wrench to the main housing credit spigot and have turned down the credit supply and consequently the Sydney property market is withering faster than a sultana in Mildura.

It is not clear whose fingers are most firmly gripping the credit “wrench” as open confessions are few and far between.    Some say it is APRA “the bank whisperer” hissing threats (aka suasion) over tea and bikkies.  Some say it is nervous and fretting bank risk officers (and board members) fearful of a hot and unpleasant date with Senior Counsel assisting the Royal Commissioner where they may need to explain all those blanks and fanciful HEM entries on loan application forms.

The one thing we can be sure of it is not the RBA who are doing their best, by jamming the overnight rate as close to zero as possible, and report no sign of playtpus in the dry credit creeks of suburban Sydney.

And it sure isn’t our Prime Marketing Minister Mr Scott Morrison who is a firm believer in saying anything that sounds good and allowing “mum and dad” investors to soak in a bottomless ocean of credit until they get squirrel gripped by the sirens of the deep.

It is certainly not an over abundance of property either as the residential vacancy rates reported by SQM are still tight in almost all Australian cities.

It is just a lack of refreshing, sparking, goes with everything, private bank credit.

A quick glance at the tables below reveal the story of failing credit downpours in Sydney’s important credit catchments.

Table 1 shows the totals for each auction result category in the APM pdf reported by Domain this week.   Hammer time is the percentage of the listed auctions that were sold under hammer or shortly afterwards.  This week “Hammer Time” was a thirsty 16% of listed auctions and that included 24 (4%) secret squirrel deals where the property only sold after the auction dried up quicker than a Darling river billabong.  Back in 2016 Hammer time regularly cracked 30%. 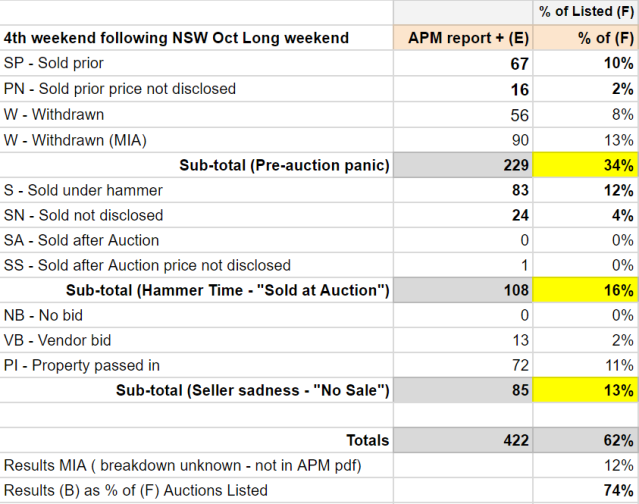 Table 2 compares this weekend (the 4th weekend after the October long weekend) with the same weekend in the previous 8 years.  The APM clearance rate this week of 48% (the clearance rate as a % of the listed auctions was 28%) was lower than the last big dry back in 2011.

Table 3 is a summary of recent weeks of auction action.    Some 2016 figures are included to remind us all what credit taps turned to full can do!