The NSW Premier Gladys Berejiklian must commit to starting work on the Metro to Parramatta (via Epping) this year while the Epping to Chatswood line is shut down for 7 months.

The Sydney Morning Herald has reported that work on the Metro Northwest line between Rouse Hill and Epping is now running to schedule and the new Metro line should be open in the first half of 2019.

The Premier Gladys Berejiklian celebrated on Sunday with an photo-op involving large spanners,  plenty of Hi-Vis and the announcement that the project would be delivered at least $500M under budget.

During the festivities Ms Berejiklian was reported as stating

“..Ms Berejiklian said reining in costs had allowed savings that would be used for the rest of the $20 billion-plus Sydney Metro project…”

All that is now required is an announcement by Premier Gladys Berejiklian that the Sydney Metro project will now include an extension from Epping to Parramatta along the alignment in the original plans for a Chatswood to Parramatta heavy rail connection.

A Parramatta to Epping Metro line

A recent Glass Pyramid exclusive discussed the proposed Parramatta Light Rail “White Elephant” that goes nowhere, will cause enormous disruption and has a budget that has already exploded to $3.5 Billion.

That article noted that the worst part of the Parramatta Light Rail proposal was that it involved converting the heavy rail line between Carlingford and Clyde to light rail rather than a serious fast high capacity rail connection between Parramatta and Epping.

By turning the existing heavy rail corridor into a “toy train” light rail that terminated at Carlingford the Liberal Government would be effectively destroying the potential for a fast high capacity connection between the Western suburbs and the city via Chatswood and the lower North Shore.

The red line shows the Carlingford to Rosehill section of the Carlingford-Clyde line.   The Green lines show the short new tunnels that would be required to complete the Parramatta to Epping Metro connection.

An alternative high capacity route to the city via the North Shore was the original idea when the Chatswood to Epping line was built.

It would allow Western Sydney to travel to the North Shore without travelling through the congested Sydney CBD section of the network.

The diagram below shows: 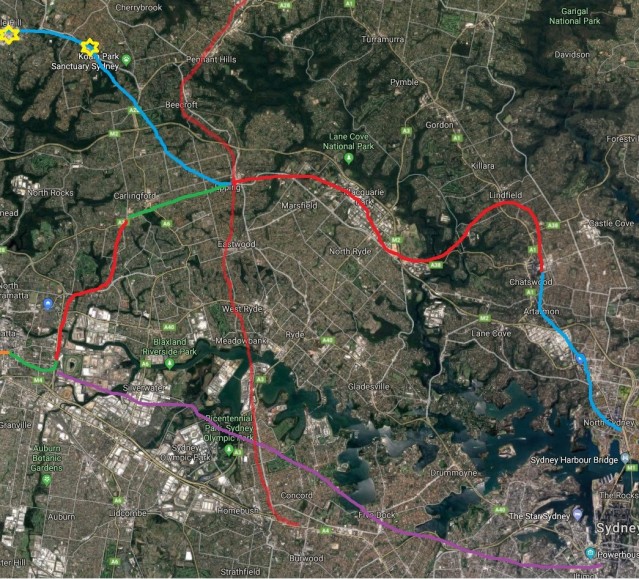 Arguments against extending the Sydney Metro to Parramatta via Epping

It is hard to think of a single decent argument for NOT extending the Sydney Metro from Epping to Parramatta.

It simply ticks too many boxes:

What does Mr Geoff Lee have to say?

The local member for Parramatta Mr Geoff Lee is a pleasant guy, a long time resident of Western Sydney and a university lecturer in business.

Perhaps he can explain the arguments against completing a Sydney Metro connection between Parramatta and Epping and why building a $3.5 Billion “white elephant” Light Rail that terminates at Carlingford is a better use of taxpayers money?

Geoff it is time to wake up and do something serious for Parramatta and Western Sydney.