From a few weeks from the crib, Sydneysiders are trained to cope with life’s outrages in a calm and measured manner.

Children are served babyccinos with incorrect amounts of foam just to help them to adjust to life’s imperfections.  Teenagers are rationed, one week a year, to  a reduced number of their ‘pals’ gushing on social media about their “hot” and “amazing” new bottle tans, body art installations, chemically assisted cut abs, inner beauty, holiday plans, life choices, mindfulness etc .

Most importantly adults regularly go to “property primal scream” sessions where they are taught to cope with the incomparable pain of property prices failing to increase at a much faster rate than income growth.

There are signs that all of that preparation and training may be required as only 360 auctions were scheduled yesterday in Sydney and that is a large fall on the average of close to 500 auctions each week over the first 13 weeks of Auction Action and an even bigger fall on the boom days of 2015 and 2014 (this week was Easter week in 2014).

In addition, while APRA and RBA control the strings of the Sydney property market and could choose to continue what they have been doing since early 2013 – pumping it up as hard as possible on tanker loads of cheap and easy NIRP/ZIRP credit – there are signs that they may be losing their nerve and are edging slowly backwards away from the crime scene.

Could the market be heading back to the snoooooooooozey days of mid 2010 – early 2013 when real estate agents attended each other’s auctions for moral support?

While these developments have generally enhanced resilience in the household sector, the tighter access to credit for households could pose near-term challenges in some medium- and high-density construction markets given the large volume of building activity that was started several years ago. These apartments are popular with investors and foreign buyers and any concerns over settlement risk and/or a slowdown in demand for Australian-located property by Chinese and other Asian residents could lead to difficulties for particular projects, though there is little evidence of either occurring so far. Risks seem greatest in the inner-city areas of Melbourne and Brisbane, where new supply is most geographically concentrated, and increasingly in Perth.

One of the things about neoliberal economics is that the debt pumping regulators, that are essential to neoliberal economics, are soooo good at denying that they ARE debt pumpers that when they do lose their nerve, and suddenly turn down the flow, they act as though they had NOTHING to do with creating the bubble of debt and asset prices in the first place.

“Nothing to see move along”

Even though RBA controls the price of the target rate and APRA controls the terms on which banks extend credit and fund their operations – they pretend they don’t – both on the way up and on the way down.   A French farce with diphthongs.

As noted last week Mark Gottliebsen is on to this caper and has warned of dire consequences if RBA and APRA do not get back to work and do their job of supporting the Finance and Real Estate sectors of the economy by getting the debt pumps working and spraying lots of fresh debt in their direction.

The Sydney Morning Herald and Australian Property Monitors report records that agents reported 75% of the 360 auctions listed for Saturday – which is about average.

There are THREE tables this week.  The first contains yesterday’s APM’s  results pdf sliced and diced.  The second contains a summary of recent weeks and the third contains the data and averages for the first 13 weeks of Auction Action fun.

Click on the link to read all the details in their natural habitat but the key “Auction Action” metrics are: 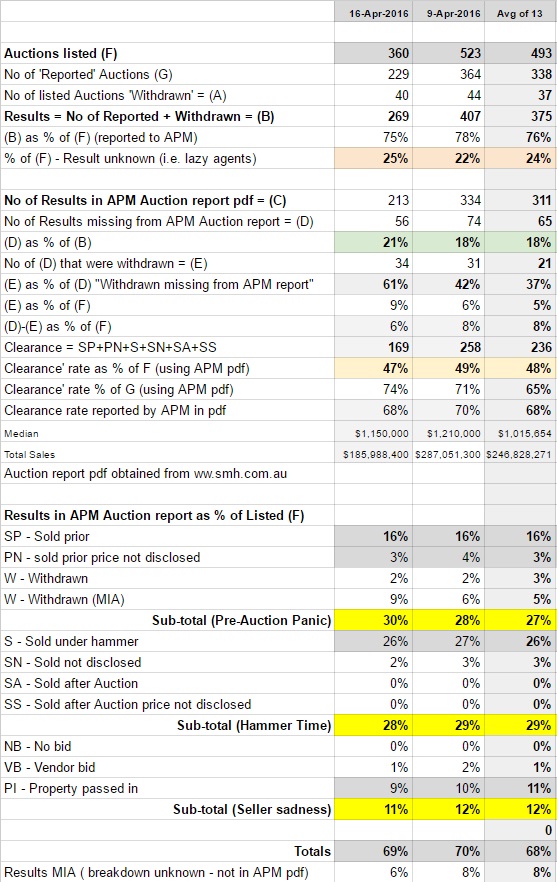 Table – Summary of the first 13 weeks of Auction Action