Perth’s vacancy rate of 4.1% and Darwin’s vacancy rate of 3.6% – with both cities experiencing falling rents for houses and apartments – demonstrate just how important a healthy vacancy rate is to ensure a competitive housing market where tenants have some real options.   If the current trends continue Perth and Darwin may find themselves becoming the most “affordable” places in Australia to live. 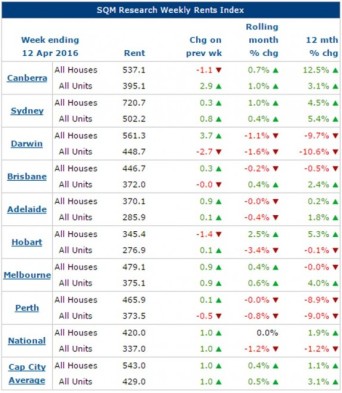 While many are looking for complicated solutions to solving the problem of speculators and foreign buyers leaving stock off the market (and thus not included in the vacancy rate data) – for example  checking water meters, broad based land taxes and imposing “Vacant house taxes” – there is a much easier solution that can be sold politically.

Leaving a housing asset empty and off the market is a typical feature of a speculative market driven by ponzi finance, ponzi population policies and insufficient supply.   Some speculators believe the capital gains will be so large they are simply not interested in the hassle of renting the property and collecting rent. While increasing the holding costs of the ‘speculator class’ sounds good in theory in practice the politics are ‘challenging’ and political courage in Australia is as rare as a Tasmanian Tiger.

If we want to solve the empty houses phenomenon and also produce a plentiful supply of affordable housing the solution is clear – cure the speculative market in the most politically palatable and fastest way possible.

Ignoring the politics of the housing market is for dreamers.

There are no prizes for having a ‘theoretically’ perfect plan that not even the most slippery politician can sell.

Sure for a period there is likely to be a larger than required buffer stock as the current army of “house hoarders” realise that the government is committed to ensuring a housing market that has a decent buffer stock of housing, begin to lose interest in an asset market that no longer produces abnormal capital gains and start to sell their stashes.

But that is not a major problem as in time any excess buffer stock will be absorbed by population growth including moderate rates of migration.

Three easy steps that are politically possible and that will

As an added bonus there will be no need to change the rules regarding negative gearing or even the capital gains discount.  Mr Bowen and the Greens can hardly oppose a policy that is designed to do the very thing they reckon their policies will do – encourage investment in new housing rather than speculation on existing housing.

Come on Scotty and Mal – just a bit of reform – wafer thin – is not going to kill you.

Doing nothing at all is likely to make the forthcoming election a major embarrassment and we wouldn’t want that would we.