The head of APRA Mr Wayne Byres has come out and admitted in a response to the ABC that APRA was a bit slow off the mark prior to the GFC and possibly again since. 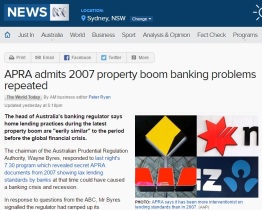 However, the problem is much more serious than APRA just being a bit sleepy and ‘trusting’ that the banks were doing the right thing and displaying a bit of commonsense.

The problems are baked into the neo-liberal ideological assumptions that lie behind the structure and the regulation of our monetary system.

There is NOTHING about the Australian Banking system that is consistent with a neo-liberal vision splendid of deregulated individuals or corporations working in their own interests in “free markets” to produce a productive world improving outcome.

And for good reason as a fiat monetary system like the one we have is purely a creation of the state. It cannot exist without the state.  The creation of money only happens when and how the law allows. What most do not realise is that over 90% of the time it is the banks that are creating the stuff and not the government.

If banks were still issuing receipts (bank notes) for gold and other commodities deposited with them for safe storage and people were trading in those banks notes it would be a different kettle of fish but they do not – they create money by creating loans/deposits which can be withdrawn by customers using notes and coins issued by the state.

Yet APRA and the RBA talk and keep acting as though the monetary system is some sort of natural market and it is appropriate that they just stand on the edges with long poles (or polite private letters) to prod it in the right direction from time to time.

As a consequence they are deceiving the public as to how the system operates and their massive and “independent” powers within the system.

We are running a Central Bank / Private Bank frankenstein monetary model where everything happens for a reason yet the regulators pretend that they are largely technicians responding to a couple of objective criteria / readings – like inflation.

They do this because to admit just how much power they have over the allocation of resources in the economy would immediately raise eyebrows across the nation and people would question – why on earth do we treat one of the most important features of civilised society – a public monetary system – as though it is a private thing that warrants modest regulatory oversight at best and preferably is left to do its own thing.

The RBA controls the overall demand for debt via manipulations of the target rate each month.

APRA controls who gets access to credit and the price of specific credit products via its shadowy ability to control :

* How banks select borrowers and approve and grant loans

* Prices of various loan products – indirectly by controls over the source and quantity of funds required for different lending.

There is simply no way we could have a household debt / household price bubble without the specific consent of both the RBA and APRA.

* choose customers (ability to pay),
* choose what they lend for (what assets or projects get money squirted in their direction),
* choose how much they lend (10% deposit, 20% deposit – zero deposit),
* choose the price at which they lend

is completely under the control of the RBA and APRA. If they choose not to exercise their powers in a particular way that is a choice.

If they claim that their choices are limited as a consequence of international agreements that Australia has signed up to they must come out and explain that (again and again and again) so the general public understand that we may have entered bad agreements that limit our ability to manage our economy in our Australian interests and we may need to exit them OR do what our trade rivals do – just ignore them in practice and deny any suggestion to the contrary.

Yet when when was the last time you heard the IPA or CIS call for the current model of the Australian Central Banking / Private Banking monetary system to be dismantled and rebuilt?

Most of the time the rent seekers are too busy denying the system we actually have exists – “hush don’t let the folks know how they are being ripped off”.

Our current model for our monetary system is nothing more than a state administered rent seekers pleasure dome without anything even slightly relaxing.

We need a public monetary system (and regulators) that serves the public interest.