The Prime Minister Malcolm Turnbull’s choice of present for the banking sector at the jolly Bank of New South Wales (Westpac) celebrations may have caused a few canapes to become lodged in windpipes but if he wants to make a difference he really needs to do his birthday shopping at a sporting goods wholesaler.

The chances of any real action by the Tu 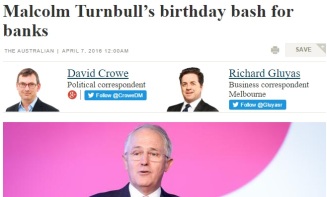 rnbull government to bring the banking sector under control is ZERO.

There may be some tough speeches and a bit of parsley placed on the APRA/RBA meat tray but that is about it.  Banking reform in Australia is in need of a cricket bat, waved vigorously, rather than a few expressions of disappointment and chastisement.

The whole idea that banks in our modern system can be ‘cut free’, “held accountable” or can avoid “moral hazard” is questionable in any event.

Fixing the problem with Australian Banking requires an explicit acknowledgment that:

Only if the banks lose their money / deposit creation powers, and become mere intermediaries (which they currently are not despite what people often think and are often taught at university) between those who wish to lend deposits and those that wish to borrow them, can they be “cut free” and allowed to fail as the failure of a bank in those circumstances will not destroy a large chunk of money in the financial system (all deposits would still exist somewhere) nor remove a large “creator” of new money (authorised deposit making institution) in the system.

It was defective even when it was closely supervised and regulated to prevent harm.

The neo-liberal experiment of deregulation over the last 30+ years has simply been a process of peeling back the layers of  protective regulation to reveal the incoherence and dysfunction at its core.

It is time to start the process of reform before it does anymore damage and we have to listen to any more moronic and disingenuous and misleading speeches by those operating the current system.

Stop pretending our current model of banking is anything other than regulation and that ‘deregulation’ makes any sense.   Regulate it clearly and explicitly.  No more RBA and APRA smoke signals and delphic utterances.   Spell out the choices you are making in clear and direct language.

Wayne B  “We want to pump up house prices so we are going to let the banks borrow really cheaply from off shore lenders.  That will push up the exchange rate and may cost some jobs but we reckon pumping house prices is more important than exports and import competition”

Start the process of preparing to remove the bank entitlement to create money / create deposits that are treated as though they are public money or fiat. Essentially, make them truly deposit taking institutions and not deposit making institutions.

Start reducing the volume of “bank created” money in the economy by restricting the bank’s ability to create it and replace it with actual interest free publicly created money. The simplest way of doing that is by using this interest free public money to fund the fiscal deficit.  Mr Morrison will be running big fat deficits for years so we may as well put them to good use.   Probably the worst feature of the current model is that when the banks do create new money they attach an interest trailing commission to it.  That is completely unnecessary but don’t expect a bank economist or one of the banking fanboys to admit it.